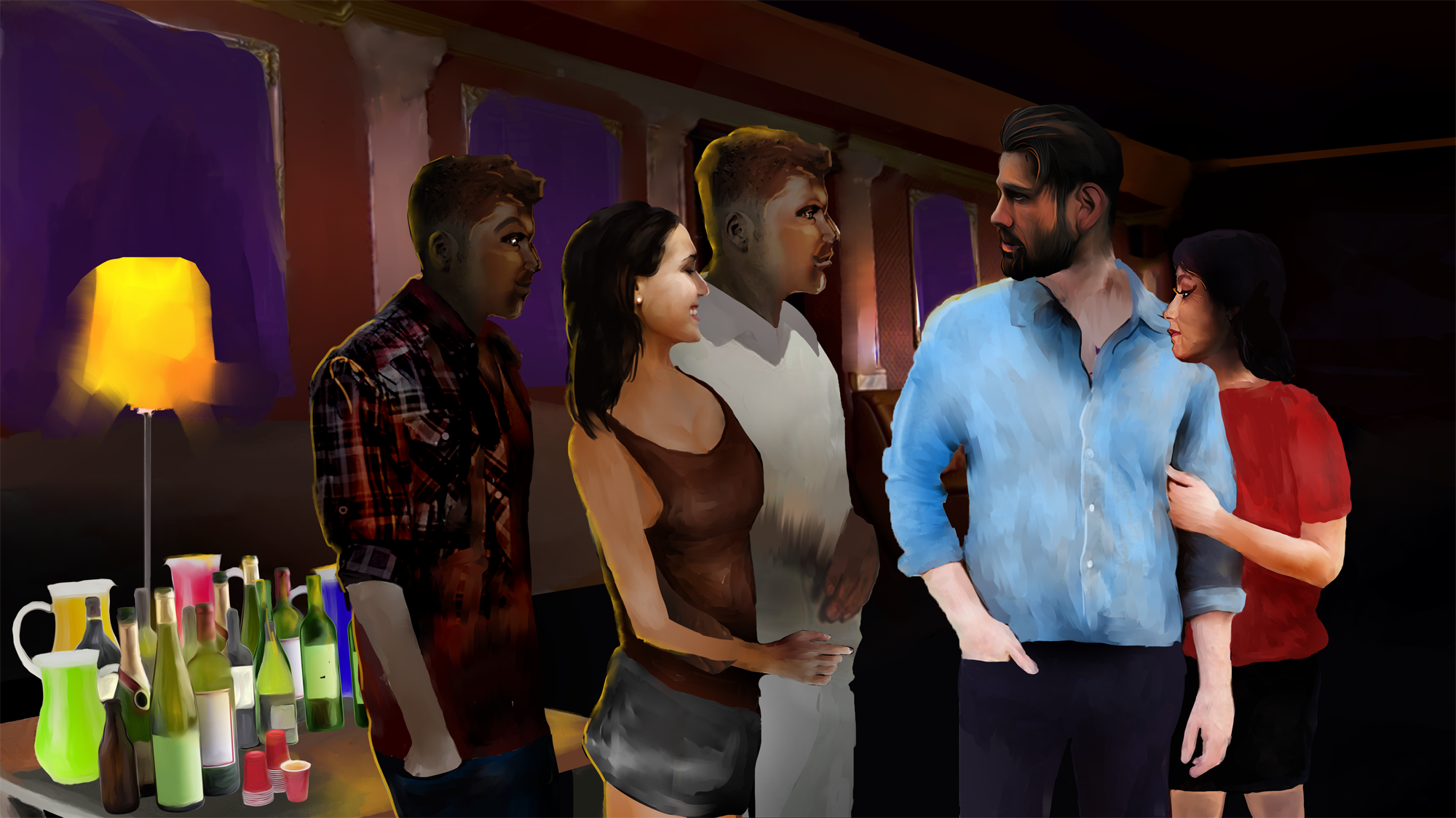 We got to the room and peeked our heads in. The couch that we had been on and the couch where John had been having all of the fun were already occupied by other people.

I was having trouble picking him out of the crowd in this dark room. “Where?”

“He is over there by the window, putting his shirt on,” she replied. “I don’t see the couple, though.”

We walked past the silhouetted bodies on the couches, by the walls, and on the beds. The atmosphere was still very sexy and mysterious with random sounds of pleasure echoing all around us.

We walked up to John, who was now back in his clothes. He noticed us approaching and smiled.

“Hey, guys!” he greeted us before we had to break the ice again. “Bella and Jeff, right?”

Bella and I looked at each other and laughed, as it reminded us of the intense moment we had experienced earlier in the night.

“About that…” I figured I’d get straight to the point. “We’ve been thinking throughout the evening about how some couples have a single guy join them rather than do a swap with another couple.”

“You think it may be your thing?” John too cut to the chase with this straightforward question.

“I’m not really sure yet,” I replied. “But I have noticed that out of all the different arrangements that we’ve seen here, I’ve somehow realized that for some odd reason this one turns me on the most.”

“You really shouldn’t say that,” John replied. “There is nothing ‘odd’ about it. If you’ve discovered a new thing that you’re into and your wife is into it too—you should consider yourself one of the luckiest guys alive.”

I was taken aback by what he said for a second. I felt like I was making excuses for my own sexual discovery while John was much more comfortable with it.

“You’re right,” I replied. “I don’t know why I phrased it that way. I guess what’s odd to me is that I had never discovered it before. It kinda just hit me today.”

“I think it hit both of us,” Bella jumped to my rescue.

“I guess one thing that I’m struggling with,” I kept thinking out loud, “is that why in the world would I be turned on by the thought of my wife being with another guy?”

“There are tons of reasons, actually,” John replied. “You know what I think you should do? I think you should talk to the couple I was just with. They kind of remind me of you guys. They were very new about a year ago and were completely shocked at themselves when they found the courage to explore and join this lifestyle. Tim, the husband, was puzzled by pretty much the same questions that you’re asking yourself now. I think a lot of guys are when they first realize they’re into it.”

“Really?” I was happy to hear that.

“Yes,” he replied firmly. “Though some of them don’t care to know the answers. Those who do end up with very similar explanations.”

“You think you can introduce us to Tim and his wife if they haven’t left yet?” Bella steered the conversation back to its original intent.

“Oh, they are still here. And her name is Kat,” John replied. “They’re probably finishing up their shower, and I bet we can find them in the kitchen refilling their drinks. You wanna walk over there now and see?”

We walked through the mysterious forest of bodies, abandoned clothes, and condom wrappers all the way to the hallway. Bella was leading the way, John was following her, and I was following him. Even though it seemed like we randomly left in that order, I wondered if he cut in on purpose to be able to check out Bella’s cute ass as she was walking in her tight, sexy outfit. Once again, the thought turned me on.

We walked all the way to the kitchen area, and just like John suggested the couple we had seen with him earlier was now fully clothed and looking through the bottles of wine that had piled up on the table.

“Hey guys,” John smiled at the couple as we approached them.

“Oh hey, sexy,” the girl replied as she stepped towards him and gave him a deep, wet kiss, her husband watching quietly from the sidelines.

“I wanted you guys to meet this couple.” John turned back to us as we stepped closer to introduce ourselves.

“Hi, I’m Jeff.” I spoke first and shook her hand and then his.

“I’m Kat,” the girl replied. “Were you the couple watching John and I earlier?”

“Yes,” Bella replied, as it was her turn to make introductions. “Sorry if we were too close; we didn’t mean to intrude.”

“I’m Bella.” My wife shook her hand and Tim’s hand next.

As soon as we’d finished, John took control of the conversation once more. “So, this is Jeff and Bella’s first time.”

“Oh?” Kat replied with a smile. “First time here, or first time at a club like this?”

“First time ever even thinking about it, actually,” Bella admitted with her own modest smile.

“Oh my,” Kat replied. “That’s very brave of you. Most couples don’t venture out for years, so you guys are ahead of the game.”

“I wouldn’t call us brave,” I jumped in. “We just felt comfortable with the hosts of the club when we talked to them, so we thought we’d come in to check things out and learn.”

“That’s really awesome, you guys,” Kat continued, she and John holding each other as if they were a couple rather than Kat and Tim.

“It seems like they want to explore more of a situation with a guy rather than anything else at this point,” John continued. “I thought it would be cool if they could pick your brain and Tim’s about it all.”

“Yes, of course!” Kat replied. “Do you guys want to grab a table and chat now?”

“Only if it doesn’t get in the way of your plans here tonight,” I replied, to make sure that we were not literally cock blocking.

“I think we’re pretty much done for the evening,” Kat relied. “Right, babe?”

“I think so,” Tim spoke for the first time but then softly added: “It’s always your call, honey.”

“Let’s all grab a drink and see if we can find a spot in the main area,” Kat suggested. “It should be pretty quiet in there by now.”

John gave one more long, wet kiss to Kat and she slapped his ass as he walked away. Bella poured a little more wine in her glass and I armed myself with a soda to get some caffeine into my bloodstream to keep me alert and awake.

We made our way into the main area and indeed it was pretty much empty, with a few people randomly going back and forth between the kitchen and the rooms. We found a cozy corner with a high table and four bar stools, the perfect spot to have our private pow-wow.

“So….” Kat smiled and cuddled up close to Tim, which was the first time we saw her act like a couple with him. “Tell us everything! What made you come here?”

Bella looked at me to see if I was going to speak or if she should. She seemed like she wanted to, so I tapped her on her butt to let her know that she should go for it.

“Well,” she started. “Things have happened kind of fast. We’ve been together for five years and I think for the most part we have a great relationship and a good sex life. But you know, since our first year when we’d just met and wanted to screw each other all the time, things have slowed down.”

“I think you guys are still in better shape than most if you ask me,” Tim insisted politely.

“We think so too,” Bella replied. “We weren’t aggressively looking for any kind of a sexual jumpstart or anything. We just stumbled upon a TV special about these types of clubs and it caught our interest.”

Bella looked at me again to see if I wanted to take over, but I was happy that she was taking charge. Plus, it was interesting to hear her part of our story as I was hearing it from her perspective for the first time, just like Tim and Kat.

“But then somehow we ended up talking about it more, and Jeff looked to see if something like this even existed in the area.” Bella paused. “We found this club and then talked to Jessi and Mark. We were surprised at how comfortable they made us feel about coming and checking things out, and boom! We just showed up.”

“Why do you say that?” Tim slipped into the conversation with a question.

“I don’t know…” Bella hesitated. “This is not like us. This is not something I’d ever thought we’d ever do.”

“To be fair,” I jumped in to Bella’s rescue. “We did do some research and talked about it on a few occasions. Bella is right, though; this is certainly not something that we would ever have thought we’d do, and it did all come together rather quickly.”

Kat’s answer made sense.  But I wanted to steer the conversation back towards the topic at hand. “So, there is a reason why we wanted to talk to you guys. Even though we just came in to watch the… live porn, I kind of ended up being turned on by what I’ve seen with couples like yourselves sharing their better half with another man. I’m still struggling with what is happening to me and why I haven’t ever had this feeling before. Since it looks like you guys have really embraced this scenario, do you have an idea of what I should make of this new craving, and if Bella and I should act out on this?