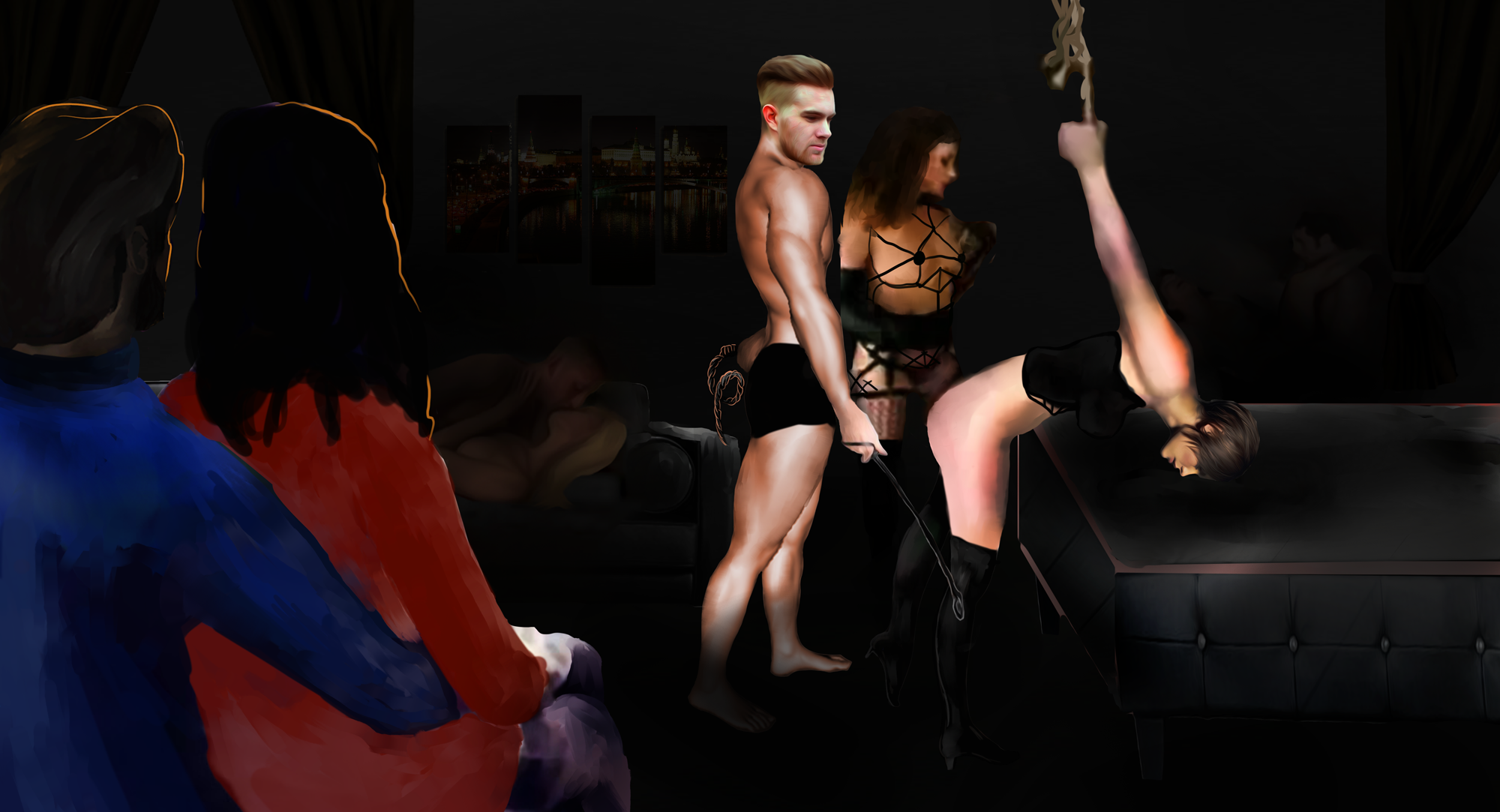 After watching our friend John have his way with a girl on the couch next to us while her husband watched, we got up from our very warm spot and headed to the door to explore some more of the club. We walked past all of the other action that we’d been sort of ignoring this whole time, and the others who were watching it. It still felt a little weird to be there, especially now that we were strolling through it all so casually.

We found a small spot to observe from along one of the walls as we walked in. The atmosphere in this room was a little quieter, as most people were watching and only a few were actually in the midst of things.

The first thing we saw was a girl with her hands bound by a rope that was suspended from the ceiling. She was bent slightly forward over one of the beds with her legs spread, wearing a corset and leather boots that came up above her knees. Her exposed, round ass was turned to another girl and a man who were taking turns lightly hitting her ass cheeks with short whips. Her face held a combination of pain and pleasure, which I assumed were the right results.

The other bed had something that appealed more to me. A girl laying on her back had her hands and ankles tied to each corner of the bed, spreading her body while restricting her movements. She wore a blindfold so that she could not see anything that was going on around her. A man mounted her prone body, slowly penetrating her with his cock as she tensed up with pleasure, pumping into her over and over again. Two other men were sitting beside her on the bed, one on each side. They were both naked and fully erect, gently caressing her.

After a few minutes, the man pleasuring the girl pulled out and literally tapped one of the other guys in like they were in the middle of a wrestling match. It happened very quickly, and the other guy started his turn as the first guy took his place on the side and began stroking her tightly restrained body. When more time passed, the third guy got his turn and the rotation started again. This was very surreal but very erotic at the same time. There were many more dimensions to it than anything else that we’d seen so far that night.

“Do you think one of them is her husband?” Bella’s curiosity finally spoke up.

“I don’t think she is wearing a ring, to start with,” I replied. “One of them could be her boyfriend, though. I don’t even know how to figure that out in this situation, honey.”

We continued to watch for a while. We could also see that some of the other couples watching were fooling around and getting frisky here, much more so than in the other rooms we had visited before. I didn’t know if it was because of the type of room we were in, or because it was later in the evening. Either way, it was cool to see how other voyeuristic couples were enjoying themselves.

“I think we should see the last room,” she replied.

“Okay,” I said, and made my first step towards the door.

Bella pulled me back by my hand. “Wait.”

“What?” I asked, wondering if she changed her mind.

“Isn’t that the dark room where you can’t see anything?” she asked.

“Yes, I think that’s the only one we haven’t seen again since the tour,” I replied.

I could see the hesitation in her eyes, as well as curiosity. “I’m a little scared, babe.”

“What if someone starts touching me…” She paused. “Or you?”

She had a point. I remember Jessi suggesting that people “met” in the dark room by touch, so I figured it was reasonable to assume that if you were in the room, you’d automatically designated yourself as “fair game”.

“You may be right,” I answered after a bit of thinking. “I’m a little torn. I’m really curious to see what goes on there, but I’m not sure if we are ready for any kind of action; are we?” I figured I’d end with an open question to gauge where she was with everything. I had already decided that I was going to follow her lead, and whatever she was comfortable doing I probably would want to explore.

“Do you think we should step back and figure out what our comfort level is at this point?” she asked. “I mean, we came here to kind of observe, not knowing what to expect. But now I feel like we have settled in.”

“You’re right,” I replied. “I certainly did not expect to feel this comfortable and turned on by everything we’ve experienced so far.”

“Me too,” she rushed to assure me. “This is exciting. I feel like we’ve discovered a new planet.”

“I’m ready to explore this more if you are, honey.” Bella spoke while looking at me lovingly yet playfully. “The only thing I’m afraid of is doing something that we will regret, or something that will damage our relationship.”

“I agree, babe,” I replied. “I am afraid of the same thing, but I think I’m okay with trying things out. How else we are to going to know if we like it or not? We can always stop.”

“I feel the same way,” she said. “I guess we just need to be honest about what we want to happen tonight, if anything is to happen.”

Again, she had a good point. We knew and trusted each other enough to be able to handle not only the trial but also the error, if one was to happen unintentionally.

I knew what I wanted. The question was still whether or not I was okay with moving forward with it. The idea was still very new to me. At the same time, I didn’t want to miss an opportunity to find out. But what if I hated it?

“Let’s make a pact,” I suggested. “Let’s promise each other that whatever happens, tonight is only for our exploration and entertainment purposes. Even if things go wrong. This is an experiment.”

“I also propose that if either one of us is uncomfortable with anything that is happening, we should speak up, and that should put an end to whatever is going on,” I continued.

“Yes,” she agreed. “I remember that Mark and Jessi said that the most important thing is to communicate when something is not working for you, so there are no regrets.”

“Okay now, the moment of truth,” I figured I’d just go for it. “If we both have amnesia tomorrow and tonight we could do anything we wanted to—what would you want to do?”

Bella paused. I could see that she had the answer in her mind but was hesitant to express it out loud.

“Do you want me to go first?” I asked, sensing that it might help.

“Yes,” she replied with noticeable relief.

“Okay. I…” I paused before saying something that would trigger the biggest sexual experiment of my life. “… I want to watch you go further with another guy so I can see if it still turns me on.”

There! I said it. I know I could not take it back and that it would live in our minds past that night, even if we decided to forget that the night ever happened. But I wanted to make sure that I was honest with my wife about the newly discovered sexual fantasy (or was it a fetish?) that I had found myself oddly turned on by.

“I want the attention of another man.” The words just poured out of her. “I think it will make me feel sexually alive again. Not that I don’t feel alive now. But I don’t know if I… you know… still am sexy. Not to you, but to other men. And I don’t want to feel like I will never experience another man again. Is this bad of me to say?”

“No, honey,” I rushed to reply. “I don’t think it’s bad at all. I think that most people feel that way but never admit it.”

“But why don’t you want to be with another girl, then?” She asked another good question.

“You know, I thought I did when we were on our way here, and I may want that in the future,” I replied honestly. “But somehow that is not as much of a turn on for me as this whole deal with seeing you with another guy. I mean, look what happened on the dance floor, you know?”

“I thought you were just being encouraging,” she replied.

“I wasn’t really trying to be,” I said. “I really got hard watching you dance with Ron, and the same thing happened with John on the couch.”

She pushed the issue. “So, do you think you will ever want to be with another girl? Because I think I will understand if you do. I don’t want you to think that I want some sort of a double standard.”

“I don’t know, honey,” I replied, a bit puzzled myself. “I guess if I ever do—we’ll have to have that conversation then. For now, I think we can put that thought on hold.”

“I’m okay with it, honey,” she replied and smiled.

“Good girl,” I smiled and gave her a kiss on her damp, beautiful lips.

“Now that I think about it, I have to say that the fact that you are turned on by the idea of me being with another guy makes me much more comfortable with all of this,” Bella said. “I think I might have felt guilty if I was doing it just for myself, and I probably wouldn’t go through with it.”

“I’d love to find out what makes you want that instead of being with another woman, but I don’t think I care for now, either.” Bella smiled at me playfully.

“I guess we’re on the same page,” I stated the obvious. “So, what should we do now?”

“I think what we shouldn’t do is go into the dark room,” Bella replied.

“You don’t?” I asked, even though I was in an agreement.

“I want to see anybody who touches me,” she explained, “And if you don’t want any interactions for you, honey—there is no guarantee that it wouldn’t happen in that room.”

“I totally agree, honey.” I smiled and gave her another kiss.

“You know what we should do?” she asked, and without waiting for my reply answered right away. “We should find that couple we saw with John and pick their brains.”

“That’s a good idea,” I replied. “Let’s go back to that room and see if they are still there.”