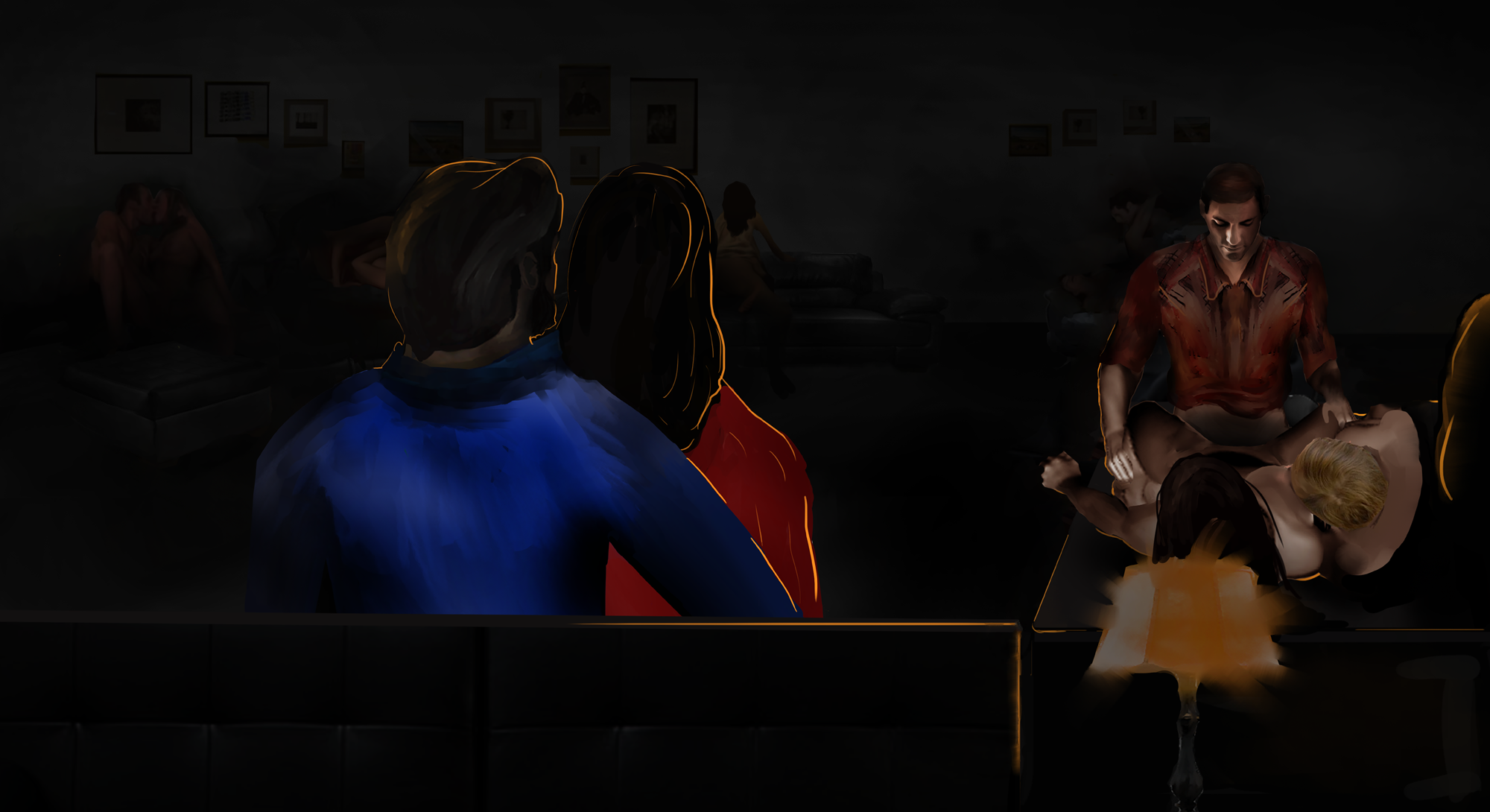 John ripped one of the condom packages open, took one out, and rolled it onto his aroused, fat cock. The girl had already climbed over him on the couch and was eagerly waiting with her visibly wet pussy ready to be lowered onto it. Her husband quietly got up from the floor and sat back down on the other side of the couch.

Finally John took the girl by her waist and lowered her onto his cock, which slowly disappeared inside of her. You could see her body twist in pleasure as she took him in all the way. She braced herself against his shoulders so that she wouldn’t collapse on top of him. His body flexed as well, making sure that he went all the way inside.

As she was recovering from her initial pleasure shock, she slowly started to ride up and down on his shaft. We could see her juices coating his cock every time she rose, before her cunt sank back down to swallow him up again. After a minute or so, she started to ride him faster as they built up a tempo. Her moans began to grow louder. He was grabbing her ass with both hands to dictate the rhythm of her gliding up and down.

Bella moved a little to be able to face the action a bit more, and I moved with her. I thought I would try something that I’d been thinking about even before we came to the club. I started to slowly move my hand up her leg as I rubbed it gently. She grabbed my other hand with hers and squeezed it a little, an unspoken signal of approval that we’d always had.

As my hand was sliding up her skirt, I could feel the warmth emitted by her pussy as I got closer. My hand finally reached its destination, my drifting fingers starting to rub her pussy through her underwear. I felt her hand squeeze mine tighter as her body shivered a bit in response. I moved her underwear aside and slid my fingers up to her slit; she was already wet. Her hands squeezed mine even tighter as her head pushed against my shoulder, a soft moan rising from her lips. I could tell she was turned on. So was I.

I continued to rub her pussy with my hand beneath her skirt as we both watched the girl ride John on the couch next to us. The wife finally collapsed onto John’s chest and they started to embrace and kiss each other while his cock remained lodged all the way inside of her. Suddenly, with one swift move, John lifted her up and put her on the couch next to him as his cock slid out of her glistening pussy. He then pushed her onto her back and moved her to the edge of the couch that was bordering ours. Her head was almost within our reach. She obediently spread her legs as wide as she could to make sure John had no problems making his way back between her legs. He wasted no time returning, grabbing his still-solid cock and guiding it back between her pussy lips. She let out another loud moan as his cock once again disappeared inside of her.

Balanced on his knees, John started penetrating the girl with his hands gripping her waist. Her small but very cute breasts bounced back and forth with each thrust. After a while John pressed even closer to her so that his thrusts could rhythmically pound her even deeper. Their lips met in a wet kiss that we could hear from where we sat. He continued pumping her hard enough that she had to pry her lips off of his so she could suck in a full breath. John’s body had fully overtaken hers. From our angle, all we could see were her legs stretched out on either side of his pelvis and her arms tightly wrapped around his muscular body.

John’s face was as almost uncomfortably close to us as he continued to have his way with her. His eyes were closed in pleasure and it didn’t seem like he realized just how close we were to him at that point.

“I can smell their sex,” Bella whispered into my ear, as I noticed her pussy getting just a little wetter.

“No, I think it’s making it seem more real,” she replied.

I decided to go for it. I pushed my middle finger past Bella’s wet lips and slid it inside of her. I don’t think she was expecting that, which was kind of my plan. She let out a relatively loud moan, loud enough to make John open his eyes to see where it was coming from.

So, there we were. My finger was inside of my wife as she stared right into the face of a stranger who was in the middle of fucking someone else, someone whose husband was watching on the other side of them. I don’t think there are many people on this planet who have ever uttered a sentence like that. I moved my head a little to the side so I could see Bella’s face. It was contorted with pleasure, her mouth open and her forehead muscles trembling. Her eyes fixed straight on John as he stared right back at her, rocking back and forth with his thrusts.

Time froze in that moment. I didn’t really know what was going to happen next. Before I could gather my thoughts, John smiled and winked at Bella while their gazes were locked. She smiled back at him through her moans, biting at her lip. Then John quickly used his hands to push off the arm of the couch and went back on his knees, pulling the girl further from the edge by her legs.

Before I could figure out if I was happy that nothing had happened or disappointed that it hadn’t, Bella looked at me with a smile and gave me a wet kiss.

“Did you think he was going to…?” I stopped in the middle of my question to let her finish it for me.

“I wasn’t sure myself,” she answered, still smiling.

“What would you do if he reached all the way to you?” I was curious about the possibilities that were running through her head.

“I seriously don’t know,” she answered.

“That was pretty intense though, huh?” I didn’t want to push any farther, but still wanted to make sure that we felt the same rush.

I was happy that she felt the moment the same way I did. I thought to myself that maybe I should stop asking her and just let things happen without checking in with each other all of the time. I didn’t feel uncomfortable with anything going on around us by that point. I was there to explore a new chapter in our sex life and I thought that she should have a green light to explore her own side of it.

I was still struggling to understand why I was so turned on by my wife’s interaction with other men, and why I wasn’t bothered that she actually may want to take it further, though.

“What would you have done if he reached out to kiss me?” Bella suddenly turned the question back at me.

“How would I feel my about wife making out with another naked man while I’m holding her in my arms?” I wanted to define the question, not just to make sure I heard her right but also to say it out loud for myself to hear.

She kept looking at me with the same curious look. “Yeah.”

“I know,” she said “But how would it make you feel? I don’t want to explore if it could cause problems between us. Especially long term.”

“I don’t think this would have been anything I’d be mad at, even if I wasn’t into it,” I continued. “We are here to see what’s out there, and trying things out could just be the way to do it. I knew that it would have been silly to assume that you would not be attracted to anything or anybody here.”

“So, what would you have done if that would have happened?” She continued to press for an answer.

“You know, I…” I paused. “I am a little confused about why I am excited by that thought and why in all of my life I never knew I would be turned on by this. But I think I would not have minded to find out how I felt if it actually happened in front of me.”

“Really?” Bella replied, a bit surprised but without any judgment.

“Is this weird?” I continued to question myself out loud.

“I don’t think I care, honey,” Bella replied. “If being sexually active and free is weird, then let’s be weird together!”

“So, are you okay with the possibility of being with another man?” I asked.

“I’ve had fantasies,” she replied. “But I never thought about doing it in real life. But I guess if it is something that would turn you on and in the right situation where I would want to do it for myself… I think so, yes!”

I was still trying to wrap my mind around all of this as we were talking about it. Between the thoughts of my wife being with another man and my realization that it was something that I may actually enjoy, I had a lot of thinking to do. But was it good to do it? I still wanted to see where things might take us spontaneously and without overthinking.

“What turns you on about thinking of me with another man?” Bella continued to push her curiosity.

“I don’t think my brain has caught up with my dick yet,” I chuckled, laying it out as honest as I could. “I think it’s that… I guess I’m turned on by you being a slut. But in a good way, you know?”

“I want to be your slut,” she replied as her eyes lit up.

That alone was so hot to hear. I felt that the sparks were once again flying between us. We were discovering each other all over again.

“John did a great job!” she answered.

“Are you ready to give me my sloppy seconds?” he asked in return.

As she lay there with John pressed against her side, her husband moved one of her legs to the side, exposing her still pulsating, used pussy. He took out his dick, which seemed very average compared to John’s, and entered her quietly without having to move his wife away from John.

“So, the husband has her right afterwards?” Bella asked the obvious question, which I assumed was more of a general nature.

“Maybe we can ask John once he’s back on his feet?” Bella suggested.

“Ask him what?” I wasn’t sure where she was going with that, though I knew I probably would have a few questions myself by then.

“Ask him what role husbands usually play in this situation,” she clarified.

“Oh, okay,” I replied. “It’d be interesting to have another conversation with him now that we’ve kind of seen this in action.”

“Maybe we can talk to the couple, too,” she suggested. “I would like to hear their perspective on this, you know?”

“Good point, honey,” I agreed. “You wanna explore the rest of the house and circle back to them later?”