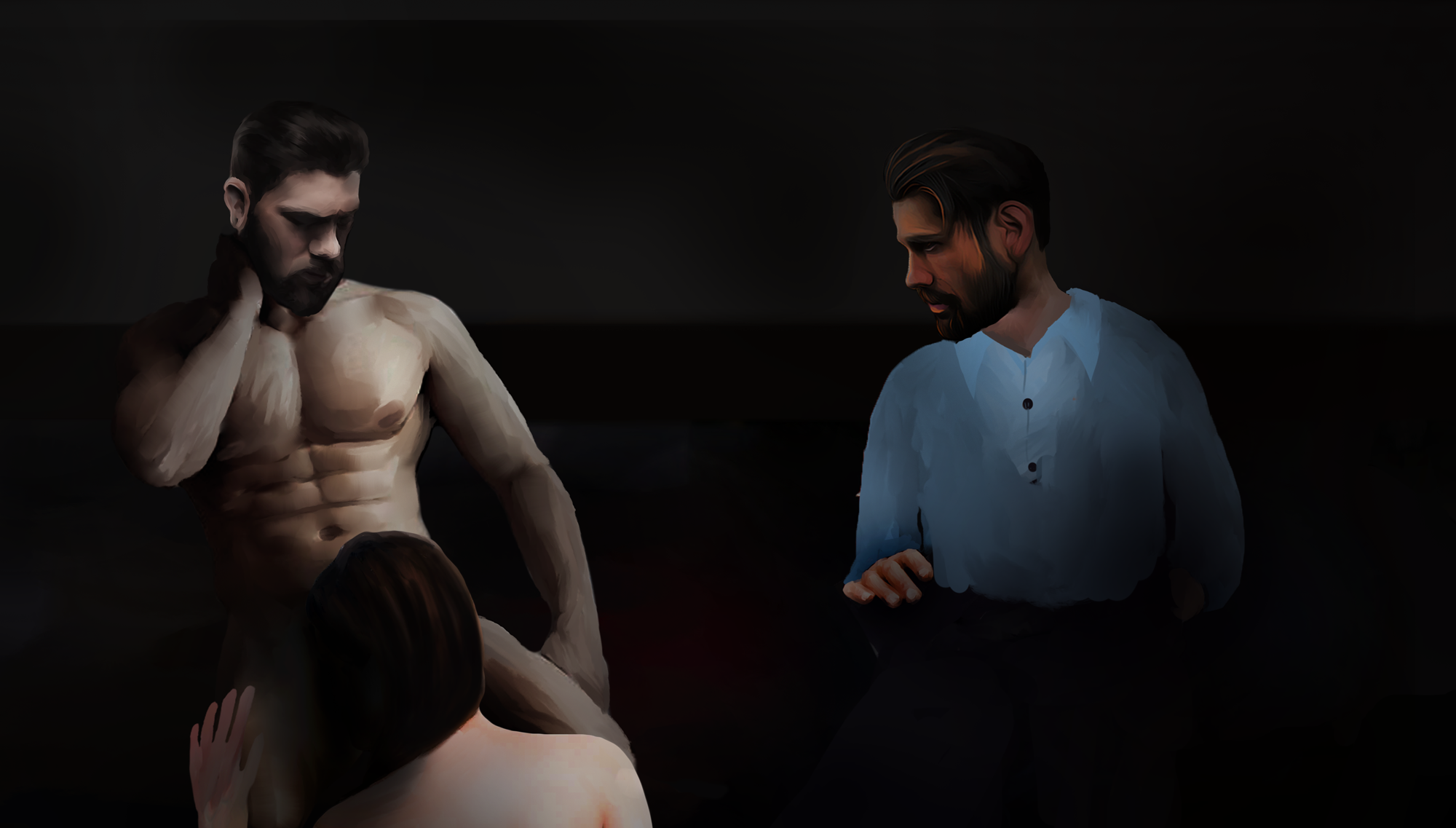 I had just removed the last piece of my wife’s clothing in front of her very first lifestyle lover, Mike, at a swinger club we were exploring as newbies. I could not believe we had gotten this far so fast, but it felt right and both of us wanted to move even further down the path that this already surreal night had laid before us.

Mike leaned forward to nuzzle between Bella’s newly exposed, perky breasts and slowly took one of her nipples into his mouth. I felt Bella’s body jerk in a burst of welcome pleasure, as she was still very much leaning into me on the couch. Her head rolled back so that her face was tilted towards me and I felt warm puffs of her quick breaths hit my face as Mike sucked on the hardening nub and began caressing her other breast with his free hand.

I was still struggling to fully make sense of why watching my wife being sexually dominated aroused me so much, but at the same time I just didn’t care. Mike’s body hovered sensually over Bella’s, claiming it from my possession inch by inch. I could smell Mike’s musky masculine scent mixed with Bella’s perfume since he was close enough where only her petite body separated him from me.

I wanted to keep a bit of a distance and once again assume the role of a voyeur, but as I started to slowly move away on the couch, Bella grabbed my hand to make sure that I stayed close. Did she want me to witness her naughty encounter up close? Or did she want me to stay and participate? Regardless, I was willing to follow whatever directions I was given by either one of them. Normally I would be uncomfortable releasing my control over any situation, but in this case the fact that I was powerless in the face of what was going on only added to my excitement.

“Stay,” Bella whispered, struggling to get the word out as each flick of Mike’s tongue and fingers left her squirming.

I continued to watch my wife twist in rapture in my arms as Mike enjoyed Bella’s beautiful breasts, and it wasn’t long before I noticed him start to work his way down her body. Her much-teased nipple slipped from his mouth, glistening and hard in the dim light, as he began the trek down her belly, peppering it with wet kisses. I could feel her body shiver with every brush of his lips. Unwilling to leave her breasts unattended, I decided that it was the right moment for me to take over where Mike had left off, and I gently slid my hands over the soft, warm mounds to feel them still damp with Mike’s saliva.

A few more kisses and Mike’s face disappeared between Bella’s legs, and it didn’t take long before her body tensed up in pleasure, arching from my lap as she threw her head back again. Her mouth opened and let out a loud moan while the eyes that merely a moment ago were looking into mine gave in to the sensation and rolled back. It was obvious that Mike’s mouth had made contact.

In the next few minutes I held my wife’s petite body in my arms as she grabbed on to me with one hand and gently combed through Mike’s hair with the other. The sounds coming from between her legs as Mike continued to hungrily work his tongue and lips on Bella’s pussy and clit only served to accentuate how wet she had gotten. Her panting breaths grew more frequent, her moans louder and more intense. It only took a few more licks and once again Bella’s body writhed in the orgasmic pleasure delivered to her from below. I had to struggle to keep her in my arms as her body continued to twist and turn in the throes of a powerful orgasm, until she slowly quieted.

Mike gave Bella one last kiss on her pussy lips and made his way out from between her legs, his mouth and chin smeared with her juices. She shivered in response, gently drawing her spread knees together.

I made a mental note regarding what seemed to be another incredible milestone in our rapidly-evolving journey, that my wife had just told me about how good another man had made her orgasm in my arms, and  how much I liked hearing it.

Mike stayed right next to Bella on the other side as she started to move up the cushions so she could sit upright again. There we were, my wife fully naked and still shivering from the sensation of her recent orgasm, sitting between her husband and a shirtless man we’d never met before this night in a dark corner of a swinger club, and somehow we were all completely comfortable with it. He leaned in and gave Bella another kiss on her full lips as she put her hand on his naked chest, her other hand still holding mine. It seemed that she did not mind being shared by two men even though she barely knew one of them at all.

Bella turned her head towards me with a cute smile and planted a kiss on my mouth. I was fully aware that only few seconds ago these lips were deadlocked with Mike’s and I could even smell his breath on Bella’s, but somehow that knowledge still made my cock twitch inside of my already very tight pants. Yes, I was aroused by kissing my wife only moments after she had kissed her other lover who was sitting right next to her. And it was obvious that she loved the attention.

The moment didn’t last long as she turned her attention back to Mike and they once again embraced in a long, passionate kiss. This time Bella took her hand from mine and fully turned to Mike to give him her full attention. I sat there watching them caress and embrace each other as their lips met over and over again, their bodies intertwining and moving languidly against one another. A few minutes passed, and then Mike ducked down to whisper something in her ear.

I was left wondering what was said, but not for long, as it became obvious very quickly.

Bella slowly got up from the couch and knelt in front of Mike, their eyes locked in a lustful stare. Mike unbuckled his belt to get Bella started but then dropped his hands to let her take over. She unbuttoned his pants and pulled his zipper down with a concentrated look of anticipation on her face, slipping her fingers beneath the waistband to tug them down, and this time it was Mike’s turn to lift his torso to help her accomplish her task.

I soon realized that she had grabbed his underwear to pull everything down at once. It took only a few more yanks from her small but strong hands and Mike’s half erect, very large cock fell out right in front of Bella’s face. The impressed look on her face said it all; she was pleasantly surprised by his size. He was certainly much larger than me, while I had always considered myself relatively average.

Bella worked his pants all the way down and off of his legs and threw them at my feet like she didn’t even realize I was there anymore. She sat back up between Mike’s legs and reached towards his still growing cock, grabbing it with a fervent hunger and with a few strokes coaxing it to its fully hard glory, even bigger in size than I would have imagined. She continued to fondle his impressive member while looking up at him with a submissive smile. But then all of a sudden she turned to me with another “can I?” look on her face. I realized that my next nod was all that was left standing between my wife and Mike’s fully erect cock.

I gave her the nod, knowing full well what I was going to witness seconds after. Bella turned back to Mike and slid her pretty lips over his cock, mouth open as wide as she could as it disappeared between them. Mike moaned loudly and I knew just how it felt for him. I knew exactly how Bella’s soft, warm mouth felt around his member. I could see that Bella was struggling to take him all in but tried to compensate for that by keeping her hand wrapped around the base of his shaft, making sure her touch was felt over all it for his pleasure.

Bella started taking Mike’s large member in and out as drool began spilling over her lips and running down to his shaved balls, as impressively large as the rest of him. Mike’s thick fingers tangled in her hair to guide Bella gently into a rhythm that he found right for him to fully enjoy the pleasure of her efforts.

Here I was sitting right next to the man whose cock was being sucked by my wife as she made herself at home between his outstretched legs. I could hear the wet, slurping sounds that Bella made while working on him, and I could see how much Mike was enjoying it as the muscles of his body flexed in ecstasy.

Bella pulled free for a second to catch her breath. She looked up at Mike, seeking his approval of her efforts to please him, and he gave it to her in a smile. I was ready for her eyes to meet mine next, but instead she opened her mouth again to welcome his full girth back inside of her, ignoring me completely.

Her enthusiasm for the task at hand only continued to grow, and I could see her really leaning into him as he started to grunt a little louder and grasp her head a little tighter. It was obvious that he was getting close.

This was the moment of truth. It was one thing to witness my wife being brought to an orgasm by another man, but it was something else completely to watch her give one to him. I didn’t have long to wait.

Mike’s breathing had grown louder and faster and his body had begun to flex more than ever as he arched his upper body off the coach in the final seconds before the point of no return. Finally… his loud grunt filled the air as his fingers tightened in my wife’s hair and pulled her face close, his body convulsing in the spasms of an intense orgasm.